13 days 1 hour and 59 minutes.  That’s how long it took Colin to row and sail from Victoria to Ketchikan in the RowCruiser.  Today at 12:59 AKDT he rowed up to the finish line in Ketchikan.  It was a fantastic moment that Race to Alaska streamed live on their FB page.  He was greeted by a number of the racers from boats that had already arrived, as well as customs folks and a case of beer. Colin was exhausted and elated and rang the bell with well-deserved gusto.

The last 32 hours have been challenging.  Yesterday he rowed for 15.5 hours straight, the longest he’s ever rowed for continuously.  Then the anchorage he was about to pull into turned out to be inappropriate so he had to continue through the night.  Once morning arrived, the sea returned to dead calm following by headwinds, and he was so exhausted that he was falling asleep between oar strokes.  Then, as if mother nature was watching, she devised a way to wake Colin up.  A killer whale charged his boat.  It raced towards Colin and leapt out of the water.  It was huge he said, like a submarine.  A couple inches before reaching his boat, it gracefully plunged back into the ocean. Wow.

Colin is staying in Ketchikan until Wednesday when he’ll catch the ferry to Bellingham and roll his boat onto the ferry with him.  That’s the beauty of having such a small boat; it gets treated like a kayak and the boat can travel with him for a nominal fee.  So far Ketchikan is treating him amazingly. It’s beautiful, the people are exceedingly friendly and he can almost walk without stumbling.  After being on his boat for over 13 days, he’s got sea legs and even though the only beer he had was upon arrival, he’s stumbling around like he’s had a few too many.  Nothing a good night sleep and some rest can’t cure. 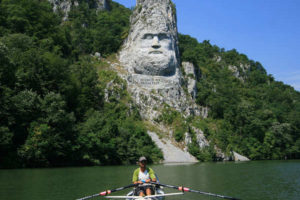 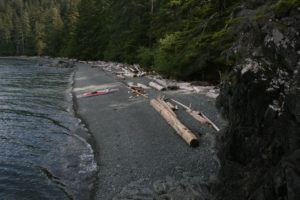 Leif and I drove down to Sombrio Beach this morning[...]