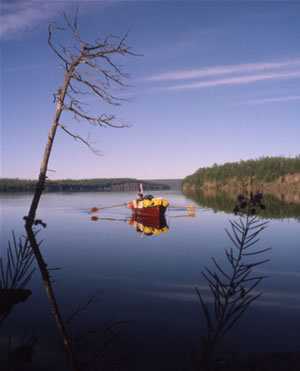 Rowing on the Yenisey River

The 5,550 km Yenisey (also Yenisei) flows through Mongolia and Siberia, and is the fifth longest river in the world.  It meanders through a range of landscapes including Mongolian steppe, canyons, taiga and tundra.  Its headwaters form on the flanks of Otgon Tenger, a sacred 13,000 foot mountain in central Mongolia, and it terminates at the Arctic Ocean at 70 degrees north.

Any river system is composed of countless capillary-like tributaries that combine and form the main flow.  In the past there was much debate among cartographers as to which tributaries are to be included for measuring the river’s length.  Some felt that the flows with the greatest volume are most relevant.  Others argued that the streams of greatest length should be used for the measuring process.  Finally it was decided that within a river’s watershed the trickle that originates farthest from the sea (measured along the route of its flow, not direct line distance) would be used to measure the river’s full length.

This system of measurement has created confusion with the Yenisey because of the way its tributaries have been labelled.  The name choosing is an arbitrary process, and generally large rivers have various labels along their length. The name often changes at major confluences.  The Yenisey, for example, starts as a small flow called the Ider River.  The Ider joins another stream becoming the Selenga River, and then the Angara River, and finally the Yenisey.  The section where the Angara River changes name to the Yenisey is at a confluence where it combines with a smaller flow.  This smaller river has been labeled the Yenisey River, and often (due to the fact that it possesses the same name as the large river it flows into) people assume this is the tributary that should be measured when determining the river’s length.   Because of this, two different lengths for the Yenisey River are often given, the one following the Yenisey Minor tributary being significantly shorter.  The official length however, offered by National Geographic, is the measurement along the Angara branch.

The world’s largest (by volume) freshwater lake is situated within the Yenisey watershed.  This ancient lake contains 1/5 of the world’s fresh water supply and is 1637 metres deep at its greatest depth. The geology in this region is quite active, and the lake itself is the result of a rift created between two tectonic plates moving apart.  Violent summer storms frequently occur on this lake due to the temperature variation between land and water.  The lake is fringed with jagged snow-peaked mountains and sandy beaches nestled between precipice-adorned bays.

Many streams and rivers flow into Lake Baikal including the Selenga River which drains southern Siberia and northern Mongolia.  The Selenga is the flow included when measuring the Yenisey River’s full length.

Lake Baikal is drained by the Angara River.  Many guidebooks to the region incorrectly state it is noteworthy that only one river exits Baikal despite the hundreds of inflows.  This is a geographical standard, and lakes are almost never drained by more than one river. 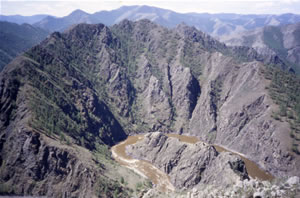 The Yenisey basin is bordered by the Ob watershed to the west and the Lena to the east.  Its area is 2,580,000 square kilometres with an average discharge of 19,600 cubic metres per second or 723,750 cubic feet per second.

The lower waters of the Yenisey are navigable by river freighters and barges.  The Angara River is navigable by medium-sized craft; however there are a few sets of small rapids (with deep channels in the middle).  The Angara also has three large hydro-electric reservoirs (including the Bratsk dam which holds back the world’s largest man-made lake), and boats need to be portaged around the dams.

The waters of the upper Ider River are spirited, alternating from flat fast-flowing water to class II-IV rapids.  The authorities do not allow boaters to navigate the river over the Russian/Mongolian border.  It is necessary to disembark on one side, take the train over the border (walking isn’t allowed either), clear customs, and re-enter on the other side of the fence.

The Yenisey River flows through regions which are relatively stable politically, and danger from humans is not high.  Inhabitants along the river are generally friendly and welcoming.  The high elevation of the upper reaches and polar latitudes of the lower sections ensure cold winters along the river’s length.  The river is free of ice from about May to early October.

The Yenisey flows from about 47 degrees latitude to above 70 and therefore the climate changes considerably along its length.  The warming effect of lower latitudes at the Yenisey’s headwaters is partially mitigated by the higher altitude.  In Mongolia the winters are harsh with cold temperatures and heavy winds.  Summer brings gusty dry conditions with temperatures in the low twenties.

In southern Siberia, the mercury often soars with summer temperatures reaching the mid thirties (90 degrees Fahrenheit) and the accompanying high humidity can make the heat uncomfortable.  Daytime highs in the northern reaches are in the high teens (65 degrees Fahrenheit) in the summer. The 24 hours of daylight above the Arctic Circle makes for easy nocturnal voyaging.