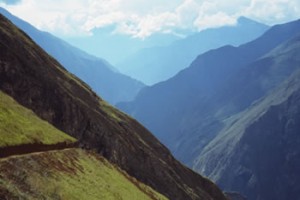 The Amazon is the largest river by volume and contains 20% of the world’s fresh water supply. At 6,275 km in length it is the world’s second longest river. It begins 200 km from the west coast of South America at almost 18,000 feet and winds its way to the other side of the continent exiting into the Atlantic Ocean. The geography along the Amazon’s length changes radically. Its upper tributaries in the Andes originate in a world of ice, snow and rock. As the flow grows in size, it creates some of the world’s deepest canyons within the flanks of the Andes Mountains. Eventually, the water become languid as the land flattens out, and the Amazon takes on the character we more commonly associate with it; a meandering broad river snaking through a hot jungle.

Millions of years ago during the Cenozoic Era the Amazon River actually flowed in the opposite direction, exiting into the Pacific Ocean. The rising of the Andes dammed the river’s flow forming a massive lake. Eventually, as plate tectonics shifted the South American plane further, the lake began flowing into the Atlantic Ocean. Ultimately the lake drained completely leaving the Amazon basin in its place.

It is said that some of the dolphins in the Amazon are more closely related to dolphins that once lived in the Pacific Ocean – a testament to how long these marine mammals have lived in the river.

Source of the Amazon

Until recently there has been controversy over the source of the Amazon. The source of a river is the head of the tributary that originates furthest from the sea and the two sources considered most likely were streams coming off adjacent mountains: Mt. Quehuishua and Mt. Mismi.

In the year 2000, National Geographic decided to settle the issue and sent in a multi-national team of geographers to definitively determine the Amazon’s true source. Using sophisticated equipment and a lot of arduous trekking at high altitude, the team finally determined that Carhuasanta Stream, which begins on the slopes of 18,363 ft Navado Mismi, is the ultimate source of the Amazon.

The Amazon basin comprises an area three-quarters the size of the USA, and within this basin millions of tributaries combine to create the Amazon River. It is only along the perimeter (mainly the western edge) of the basin where the geography becomes mountainous, with most of the watershed being a flat plain. The river and its tributaries in the flat region are fairly easy to navigate, free of rapids, and with sufficient depth for larger vessels. The current along the entire length of the Amazon is swift, averaging three knots.

Navigation downstream from the Amazon’s source is treacherous, with the river flowing through deep canyons with long stretches of unbroken class V or higher rapids. This stretch of water was only fully navigated in 1986 when an American team succeeded in negotiating the waters using whitewater kayaks and rafts. This team continued along the flat portion of the river in sea kayaks to the Atlantic Ocean becoming the first to run the Amazon’s entire length.

The lower Amazon can be explored in a range of ways – from constructing your own raft to traveling in a cruise ship. A fun way to explore the river and become immersed in the local culture is to book an inexpensive passage on a river supply ship. These boats, ubiquitous on the Amazon, service the frequent villages and cities carrying supplies and passengers. You are required to bring your own hammock to sleep in (chickens and pigs sleep on the floor), but often meals are provided.