What Time of Year to Row

In the northern hemisphere there are two major stormy seasons which need to be avoided.  In the tropical, or southern, latitudes the stormy/hurricane season takes place in the warmer months (May-November), as these cyclonic storms are fueled by warmer sea temperatures.  In the higher latitudes, it is the reverse and the worst storms are in the winter months. 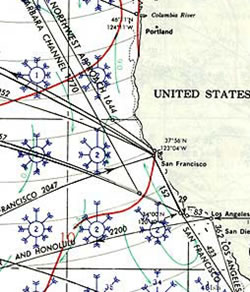 Pilot chart showing a portion of the Pacific Ocean.

For a row planned from New York or Newfoundland across to Europe, the best months would be in the summer from May to late September.  A row planned from the Canary Islands to the Caribbean can be done relatively safely during the months of November to April.  More hurricanes are forming late or outside of the hurricane season because of global warming, so it is important to pay attention to the trends.

Things become more complicated when a rowing voyage spans many degrees of latitude.  A row from Portugal to Costa Rica, for example, goes from 40 degrees north to 10 degrees north.  The beginning of the voyage is nowhere near the hurricane belt, and it is important to pay heed to northern climatic conditions.  Winter will bring stormy contrary weather, and summer will provide fair conditions.  Later on in the voyage, however, the reverse will be true so timing is very important.

The ideal time to be in a small boat off the European coast is from April to the end of September.  Not only is the weather fair, but a reliable southerly-setting wind and current is established.  This is ideal for pushing an ocean rower southwards towards toward the Canary Islands and the Trade Wind Belt.  Unfortunately, a mid-summer departure (peak weather conditions off the European coast) would mean arriving in the hurricane belt before the end of the hurricane season.

The best time to leave would be mid to late September, before the winter weather arrives, but late enough to miss the hurricane season which will be reached in about six to eight weeks of rowing.  Alternatively, safe passage could be made by leaving Portugal earlier and stopping for a few months in the Canary Islands before entering the Hurricane belt.

The same general rules apply in the Pacific and Indian Oceans.  Summer creates storms in the tropics, and winter spawns nasty weather in the temperate latitudes.

The best source of weather information for planning an ocean row is with pilot charts and pilot books.  Pilot charts are a compilation of weather data from the last hundred years or so and divulge extensive information on average wind directions, wind speeds, ocean currents, probability of storms etc.  Pilot books include some of this information as well as other useful data for the mariner.

Always be sure to double check information divulged by individuals.  Kenneth Crutchlow, president of the Ocean Rowing Society, has advised rowers that the ideal time to depart from the European coast is October to April – the very time that all pilot books recommend not to be off the European coast in a small boat.

Probably the least difficult crossing of the Atlantic from mainland to mainland (taking all factors into consideration) would be departing from the coast of Africa (around southern Morocco or Senegal) and rowing across to north-eastern South America.  This would take advantage of the prime weather conditions and currents of the tropics while avoiding the constricted reefs and islands of the upper Caribbean.  This route is only slightly further than the more common voyage of rowing from the Canary Islands to the Caribbean Islands.