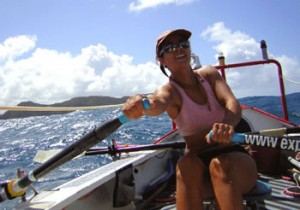 Julie rowing toward the Caribbean Island of St. Lucia.

This website provides detailed information on ocean rowing.  Ocean rowing is an emerging sport in which specialized boats are used to row unsupported across open oceans.

The first to row across a complete ocean were Norwegians Frank Samuelsen and George Harbo, who rowed an open wooden boat from New York to France in 1896.  It would be seventy years before the Atlantic was again challenged by oars.  In 1966 John Ridgeway and Sir Chase Blythe succeeded in rowing from Newfoundland to Ireland.

In recent years rowing across oceans has grown in popularity, and has been termed by some as “the new Everest”.  Several hundred people have rowed across the world’s oceans. The majority of these voyages have taken place on the Atlantic.

Due to the dynamic nature of the oceans, it is necessary to travel with the prevailing winds and currents.  This means that an east to west traverse of the North Atlantic must be done in the lower latitudes to take advantage of the Trade Winds and currents, and a reverse journey done in the northern latitudes.  Due to the colder and rougher conditions of the north, the majority of Atlantic crossings are east to west.

The Canary Islands off the coast of Africa are an ideal launching point, being situated at the base of the Trade Wind Belt.  It is five thousand km from here to the Caribbean.  Although this route starts and finishes on islands, it is considered by most to be a complete Atlantic crossing, and takes advantage of the ideal weather conditions and currents.