The challenges of pulling 18’ rowboats behind our bicycles through congested England are numerous.  Busy towns with their narrow streets and roundabouts are no-go zones, and steep mountain inclines are a place of sweat and despair.

So it was a great relief when we reached the banks of the Swale River where we could launch our rowing vessels, Tantalum and Niobium, and allow the current to carry us downstream in a world without cars, trucks and hills.  Instead, we drifted slowly past weeping willows and bleating lambs transported from hectic modern England to the timeless joys of river travel.

We were no longer being chased by lorries and cars, but little did we know that downstream awaited a creature that would tail us with indefatigable determination.  It was after descending a lock leading into the tidal section of the river that our stalker greeted us.  As soon as the lock doors opened a swan paddled straight towards Colin imploring with black beady eyes to be fed.  When Colin ignored the giant bird, instead focusing on the complexities of navigating the lock, the swan began pecking and biting rowboat and Colin himself.

We drew hard strokes on the oars putting distance between us and the gregarious creature, until finally it was out of sight.  After travelling a few km we set up camp on the grassy river bank.  The following morning we climbed out of the tent only to be greeted by our bold avian friend.  It glared at us while periodically glancing at our bulging food bags.  To further stress the point it periodically pecked Colin and I as we packed the boats.

The swan unfolded its wings looking strangely like a cross between an angel and a demon and we finally relented.  Half a pack of oatmeal cookies and few pita breads lighter, we waved goodbye to our swan and paddled on to new adventures. 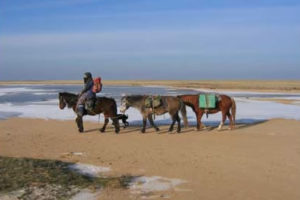 Tim Cope, 2006 recipient of Australian Geographic’s Adventurer of the[...] 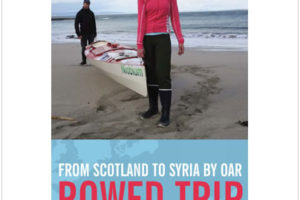