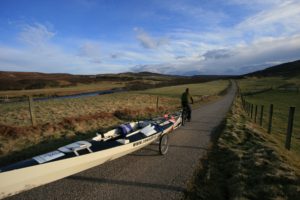 Colin cycling in the highlands of Northern Scotland.

Storm-force winds ripped across the lake while Julie and I huddled beneath a small grove of larch trees watching waves pound the rocky beach.  We dragged our two rowboats above the waterline, but still, icy froth clawed at their sterns trying to pull them back into the lake.

It is day eleven of our expedition and we have sobered to the fact that March is not the greatest time for cycling and rowing in Scotland.  The weather has been alternating from gale-force winds to snow to rain and, on occasion, a bit of sunshine. 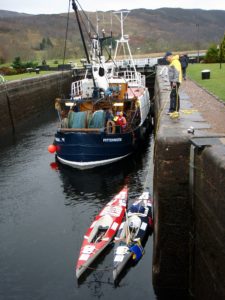 Colin lining the boats through the locks on the Caledonian canal.

Colin lining the boats through the locks on the Caledonian canal.Still, we’ve made good progress, and our modes of human-powered transportation have given us a unique perspective of the country.  Our journey began at the most northeastern tip of Scotland and since then we have travelled along quiet country lanes and coastlines, as well as through canals and lakes.

We cycled through the Highlands with our two 18’ rowboats in tow.  Here we traversed a remote landscape of rolling hills cloaked in heather and peat.  Our one-lane track forded spirited streams via stone arched bridges.

Upon reaching the city of Inverness we packed our folding bicycles and trailers into the boats and launched the vessels in the Caledonian Canal system – – a 200 year-old waterway traversing Scotland from the North Sea to the Atlantic.  It is comprised of a series of lakes connected by man-made canals.  The largest of the lakes is Loch Ness, renowned for the mythical Loch Ness Monster and wicked storms.

In March the canals are quiet, and we only passed one other boat on these waterways.  Our sliding seats pistoned rhythmically as we rowed silently past farmers fields, forest plantations, and between snow-dusted mountains.  It was during our crossing of Loch Lochy that we were hit by the storm which forced Julie and I to take shelter on the lakeside.

Eventually the gale-force winds subsided, and we were able to continue to the end of the canal system near the city of Fort William.  On the West Coast we will continue south through sinuous fjords and rugged mountains. 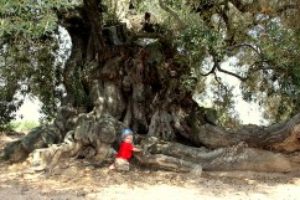 The sun continues to bake in Barcelona as we ready[...]