Rowing is the theme of the second day of R2AK for Colin.  The wind has been light and he’s been rowing all day; more than 12 hours of rowing.  This morning he was travelling on the west side of Salt Spring island, which is relatively sheltered.  He hoped that winds would be better in the more open waters and midday he moved east in order to cut through Porlier Pass to reach the more open waters between the Gulf Islands and Vancouver.

However, when he attempted to go through Porlier Pass, between Galiano and Valdes Islands, the timing wasn’t right and the current too strong against him.  He got caught in some messy turbulence and nearly shipwrecked.  He rammed into the boulders, running aground with his daggerboard. Luckily he managed to use his oars to push off the rocks before it was too late.  The boat escaped with minimal damage to the daggerboard that he said he could fix with some duct tape.

He was forced to wait for the current to switch to make the pass. When he reached the other side, he was disappointed to discover there was no more wind and the waves were sloppier, making rowing harder and sailing still futile.

It has no doubt been a tough day for all the boats, because despite Colin’s struggles he is still leading the small boats.  He is now anchored off the southern tip of Gabriola Island and is planning another early start tomorrow. Here’s hoping they get some favourable winds. 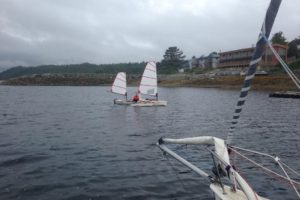