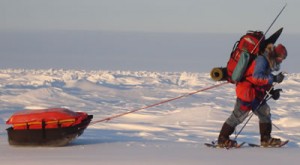 Vancouverite Kevin Vallely and fellow Canadian explorers Richard Weber and Ray Zahab are attempting to smash the speed record for an unsupported trek to the South Pole. (Courtesy of South Pole Quest)

Vancouverite Kevin Vallely is no stranger to adventure.  Currently he and fellow Canadian explorers Richard Weber and Ray Zahab are attempting to smash the speed record for an unsupported trek to the South Pole.  They’ve been trekking for 32 days now, and if all goes well, today could be the final day of the expedition.  The current record of 40 days is held by Briton Hannah McKeand.  Woohoo Canada!

The Canadian team departed from Hercules Inlet December 5th, and while the rest of us fattened up on turkey, ham and gingerbread cookies, the trio steadily made progress over crevasses and blinding whiteouts, each losing up to 20 lbs.  The storms were so bad that polar veteran Richard Weber stated conditions were worse than anything he has previously encountered at the north or south poles.
You can cheer on these Canadians and follow their triumphant ending at www.southpolequest.com or read about it in the weekend Review section of the Globe and Mail.

Richard Weber: Weber is a polar veteran who has led more than 45 polar expeditions since 1978.  In 1995 Weber and his team completed one of the most gruelling polar expeditions in history by trekking to the North Pole and back without support.  Despite numerous attempts by others, Weber and team remain the only ones to have achieved this feat.

Ray Zahab:  Ray Zahab is an ultra-endurance marathoner, having won numerous races from 100 – 200 miles in length.  Recently, he and two other athletes ran the width of the Sahara Desert, a distance of 4500 miles, in 111 days.  This epic journey was documented in the film Running the Sahara, narrated by Matt Damon.

Kevin Vallely: Vallely’s training as an architect has undoubtedly nurtured his out-of-the-box creativity, and he has dreamed up numerous unique expeditions.  These include cycling along the frozen Yukon River and frozen Bering Sea from Fairbanks, Alaska to Nome, trekking through the jungles of Borneo and leading an Arctic expedition to search for remains from the Franklin Expedition.  He is a contributing editor for Outpost Magazine. 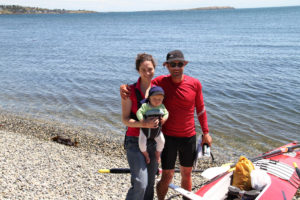 Our latest book, Rowed Trip: From Scotland to Syria by[...] 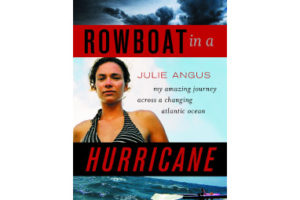