How would you celebrate your 85th birthday? If you’re Anthony Smith of London England, you’d decide to cross the Atlantic Ocean on a raft.

Anthony first dreamed up this journey more than half a century ago, but it wasn’t until recent years that he decided he’d better get going. He placed the following simple ad in the Telegraph:

“Fancy rafting across the Atlantic? Famous traveller requires 3 crew. Must be OAP. Serious adventurers only.”

It wasn’t long before Anthony had his crew selected; two Britons David Hildred (57) and John Russell (61) and Canadian Andrew Bainbridge (56). The quartet planned their journey of drifting across the Atlantic Ocean from the Canary Islands in a raft made from large sealed PVC pipes and a wooden deck.It looks like a piece of dock cut loose with a shed-like cabin and a mast. Anthony named his contraption An-Tiki as a tribute to Thor Heyerdahl’s Kontiki expedition.

When asked in a Telegraph interview about his age, Anthony joked that most people of his vintage were satisfied with a trip to the supermarket every Tuesday, but he wanted more than that. The former RAF pilot, insisted he isn’t too old to embark on an extreme expedition, and feels the journey is fairly safe.

The team left the Canary Island of La Gomera in mid January, and have now crossed about one third of the Atlantic Ocean.

Yesterday we received an email from Andrew Bainbridge’s wife, Beryl Bainbridge with an attached photo and the following message:

Thought you might be interested in the photo I received today of Andy with his first ‘catch’!!!! (Aboard Antiki) They threw it back because they weren’t sure what it was! They have seen the dorado and don’t want to catch and eat them because they look too beautiful. Guess they have too much good food aboard to be really hungry yet.

They are now over 1,100nm from La Gomera. And happy, which is wonderful. we’re all keeping fingers crossed that weather is kind to them. They haven’t had a lot of sun yet, or rain.

We didn’t recognize the fish – it was unlike any we’d seen on our own journey across the Atlantic.We are glad to hear all is going well, and wish them fair winds for the rest of their imaginative adventure. 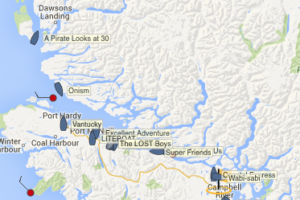 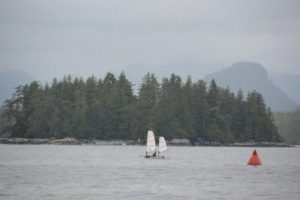 Colin is currently anchored in Klewnuggit, just outside the Marine[...]