About the Solar Boat 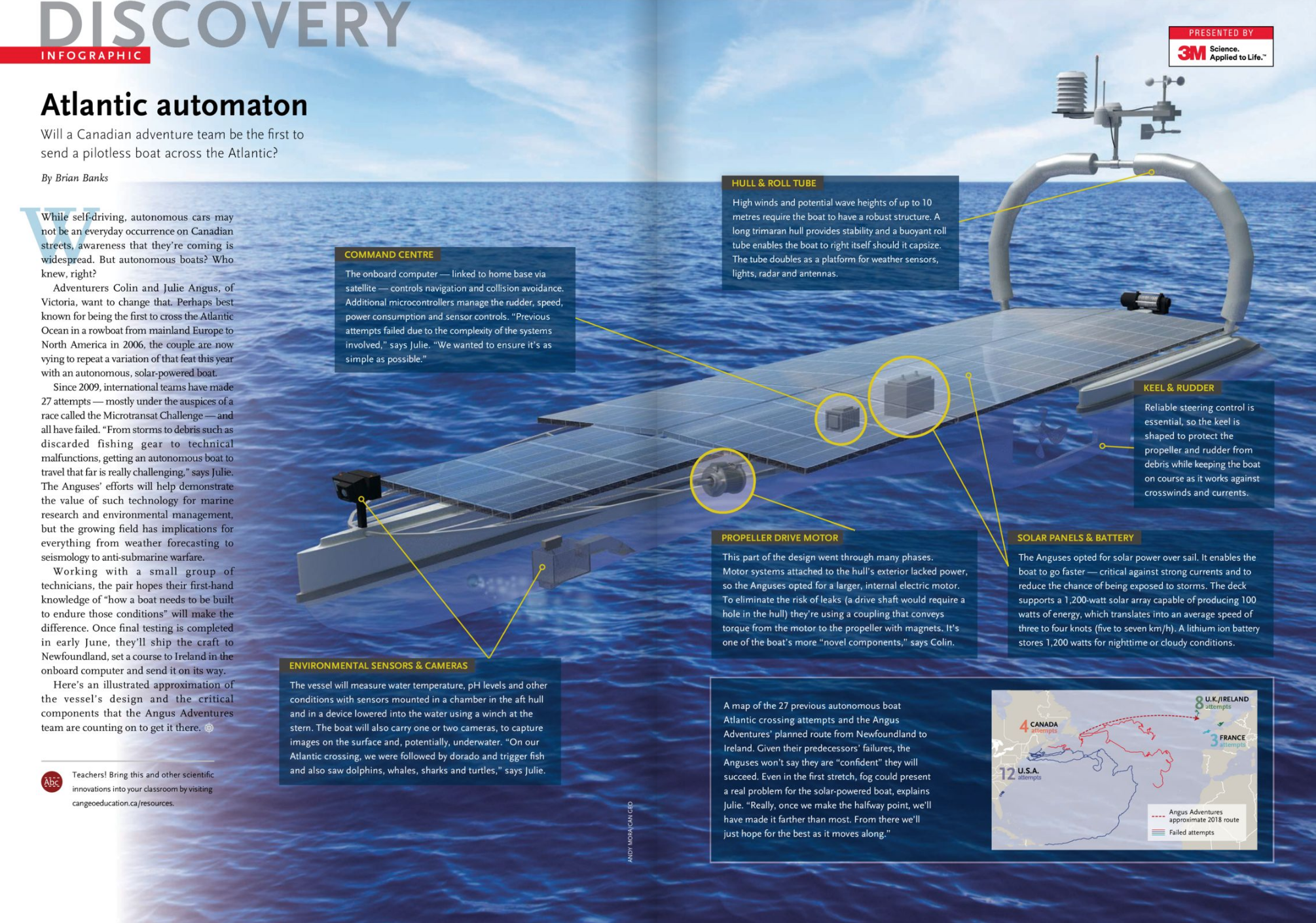 Rendering of our autonomous boat as shown in Canadian Geographic

After carefully examining all existing offshore energy-harvesting autonomous boats being developed by tech-startups and universities, we concluded the industry is facing great challenges being able to develop vessels that are both fast and reliable.  Long-distance average speeds typically range from 0.5-3.0 knots.

We decided that a solar-powered vessel would be the solution to creating a reliable, fast, long-duration boat. Unlike sail or wave-powered boats, electricity can be stored in batteries for continued operation in low-light conditions.  Additionally, solar electric vessels have the advantage of more precise control and maneuvering, along with being able to stay in position when gathering ocean data (sailboats and wave-powered autonomous boats can’t stop moving).  This latter attribute is particularly beneficial when lowering sensors to various depths in the water column.

One of the greatest challenges in the design was coming up with a hull configuration that could support a large deck for an adequately-sized 1200 watt solar array, while still being seaworthy.  A monohull simply doesn’t have the deck space (apart from a sluggish barge), and an overhanging deck creates other problems.  A multihull (such as a catamaran or trimaran) is ideal in providing ample deck space and streamlined shape, however, it is extremely challenging making a multihull self-righting, a necessary component of offshore voyaging.

After giving it much thought, our team came up with a proprietary system of self-righting a trimaran through shape and positioning of the center of gravity and buoyancy.  Developing a self-righting trimaran was the first step in our 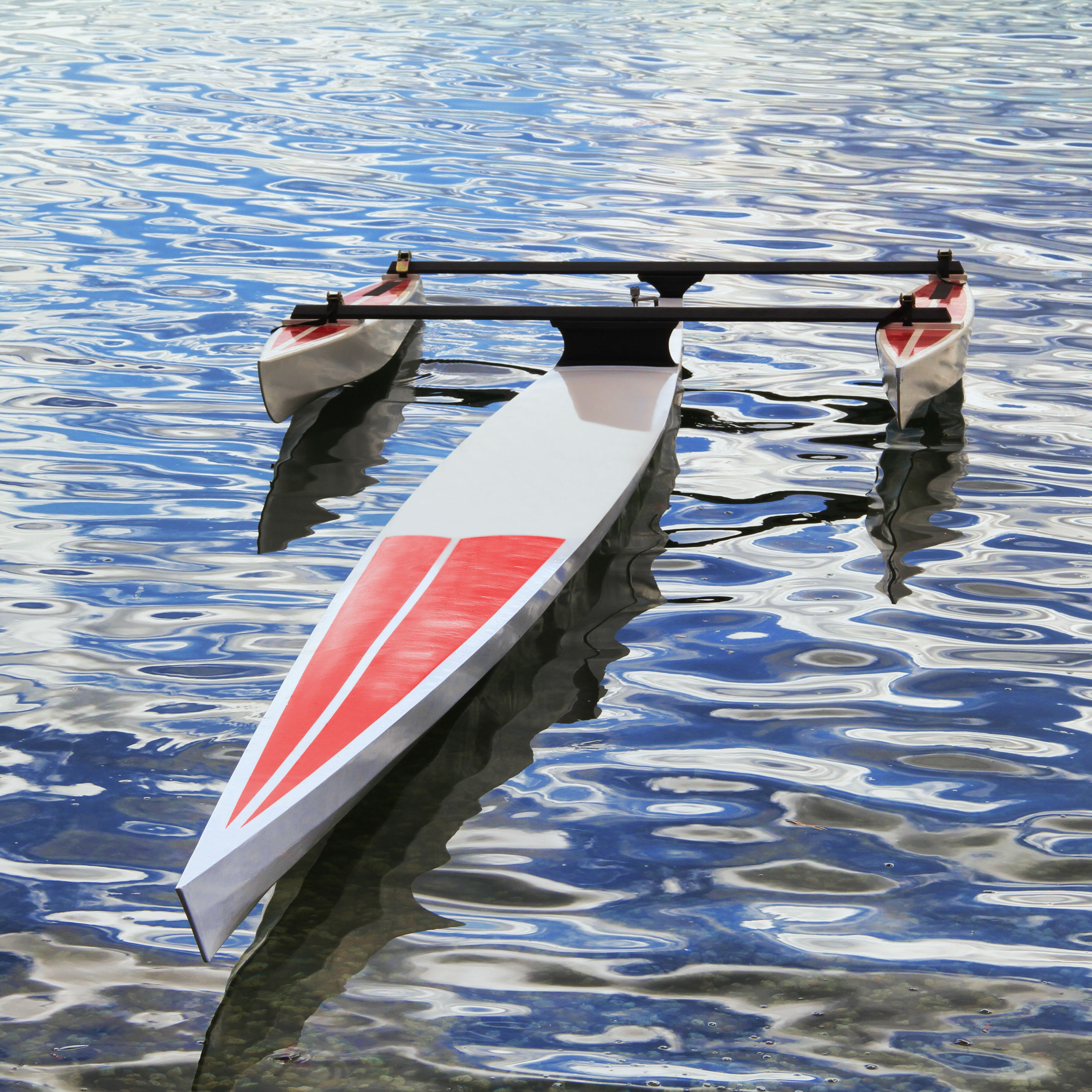 The next step was developing the drive system.  Some autonomous boat designs use off-the-shelf Torqueedo trolling motors, but we needed a system with greater efficiency, and much greater longevity than the 300 hours between required servicings.  Our design is comprised off an inboard brushless electric motor.  The large diameter motor does not require a reduction gearbox to reach full efficiency at cruising RPM, meaning greater efficiency, longevity and near-silent operation.

A magnetic coupling (provided by UK Flowtechnik Ltd) conveys the torque from the motor through the hull to the drive shaft connecting the propeller.  A magnetic coupling provides several advantages over a typical shaft seal including indefinite longevity, and almost no friction.

We have tested our drive system with a full-sized 24’ prototype, and results indicate that our vessel will move at our target speed of four knots with just under 100 watts input.  With a solar array of 1200 watts and a LiPo battery system, the vessel should have no problem outputting at least 100 watts continuously in spring, summer and fall conditions.  The vessel can move at speeds of up to six knots for shorter periods.  The motor and drive system are designed to run in excess of 10,000 hours between servicing.

The vessel is engineered to cope with sea conditions exceeding hurricane force, and it self rights instantly.

After extensive testing with the prototype, we are now constructing the actual vessel.  Some of the features we will be including in the final design include AIS, satellite telemetry, cellular telemetry, live-streaming cameras (via 3G/4G).  We will also be incorporating sensors provided by AML , and SpoonDrift (wave data measuring tool).

Please check back to find out more or subscribe to our newsletter for an email update.