Autonomous boats play an increasingly important role in understanding and protecting our oceans. They are able to collect a wealth of research data to monitor the state of our oceans as well as the aquatic life within it that would otherwise be impossible to collect due to the cost, challenging conditions, and long duration of the project.  This industry is just in its infancy, like self-driving cars and drones, and there are tremendous opportunities for autonomous boats in a variety of applications.

There is significant room for growth in this industry and autonomous boat technology, and our goal through this project is to contribute to that knowledge.  Currently all long distance autonomous boats are propelled by waves or wind, however we feel that solar power can potentially offer a better solution.

There are inherent limitations to using wind or waves to power an autonomous boat.  The boats are not able to travel in areas without wind or waves, they cannot travel quickly and are thus unable to travel against strong currents or opposing conditions, and they struggle to maintain a fixed location which is essential to many monitoring tasks.  The vessel we are creating is designed to travel continuously at 4-5 knots (in spring/summer/fall solar conditions), which is about twice the speed as the fastest autonomous boats currently available.  The speed of existing energy-harvesting autonomous boats range from about 0.8 knots to 2.5 knots.  A faster autonomous boat is able to overcome these challenges, opening the door to new potential applications and increasing the effectiveness in using autonomous boats for the many tasks they already accomplish. 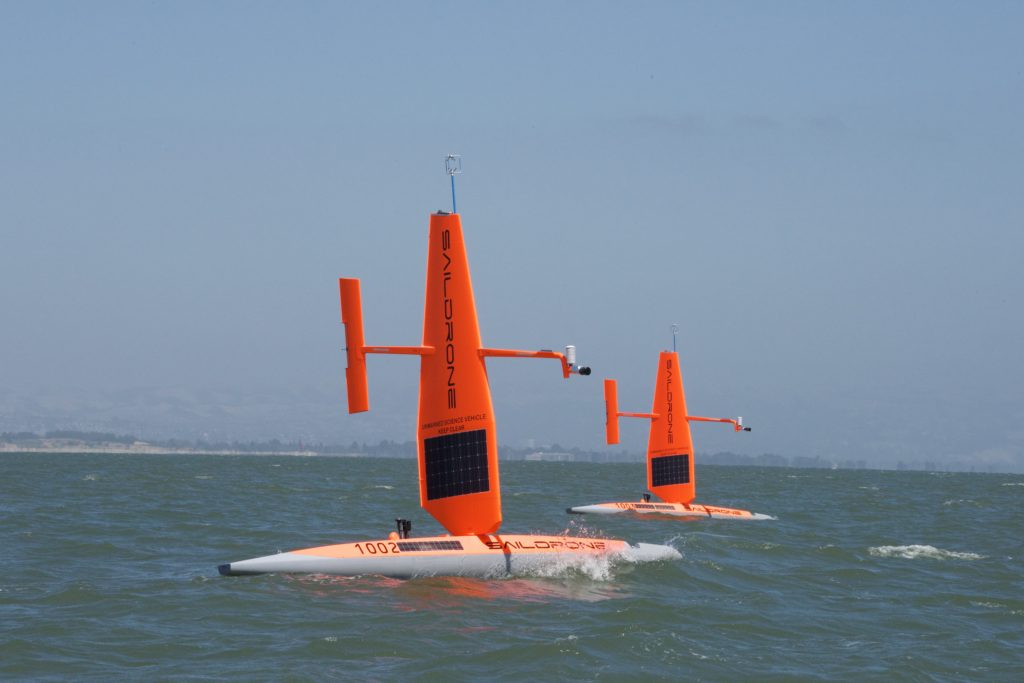 Monitoring ocean conditions such as air temperature, wind speed, barometric pressure, and wind direction is critical for weather forecasting. Ships, buoys and satellites collect this information, and autonomous boats offer an opportunity to improve upon our ability to forecast weather.

In the Pacific Ocean an array of some 70 deep ocean buoys sit near the equator and collect information critical to predicting weather and major year-to-year climate variations related to El Niño.  This array, called the Tropical Atmosphere Ocean (TAO) project, has collected information since the mid 1980s, however 60% of the buoys are no longer functioning.  To improve the real-time data collected by the US and partner nations to forecast weather and climate, including El Nino, NOAA launched two autonomous sailboats, Saildrones, on a six-month, 8,000 nautical mile round trip mission to the equator and back in the summer of 2017.  The unmanned sailing vehicles will take part in a larger field study with NASA, and visit mooring sites along the array of observing buoys. 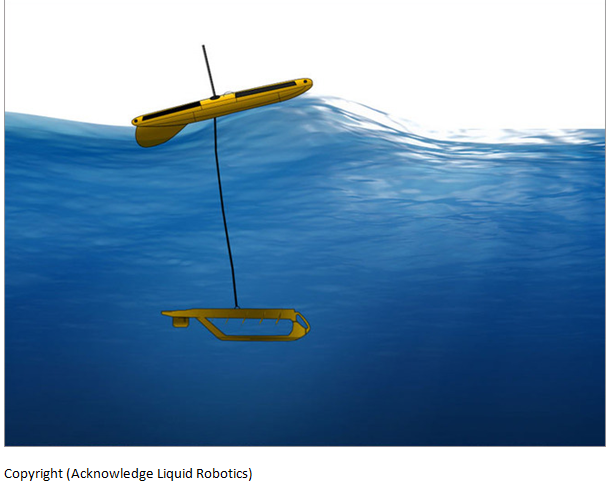 Detecting foreign submarines in a nation’s waters is important to protecting a country’s security and sovereignty. Traditionally, surface warships, aircraft, satellites or other submarines are used to locate and deal with unwelcome submarines.  However, cost and limited resources hampers the area that can be effectively protected.

Recently, countries have turned to autonomous boats to increase the effectiveness and affordability of their anti-submarine warfare programs. For the cost of a single manned vessel, multiple autonomous boats equipped with submarine detecting sensors can patrol a much larger area. This greatly increases the effectiveness of anti-submarine defence programs without increasing the cost.   The Wave Glider, an autonomous boat produced by the US-based company Liquid Robotics has been used by Navies around the world including the US, UK, and Australia. 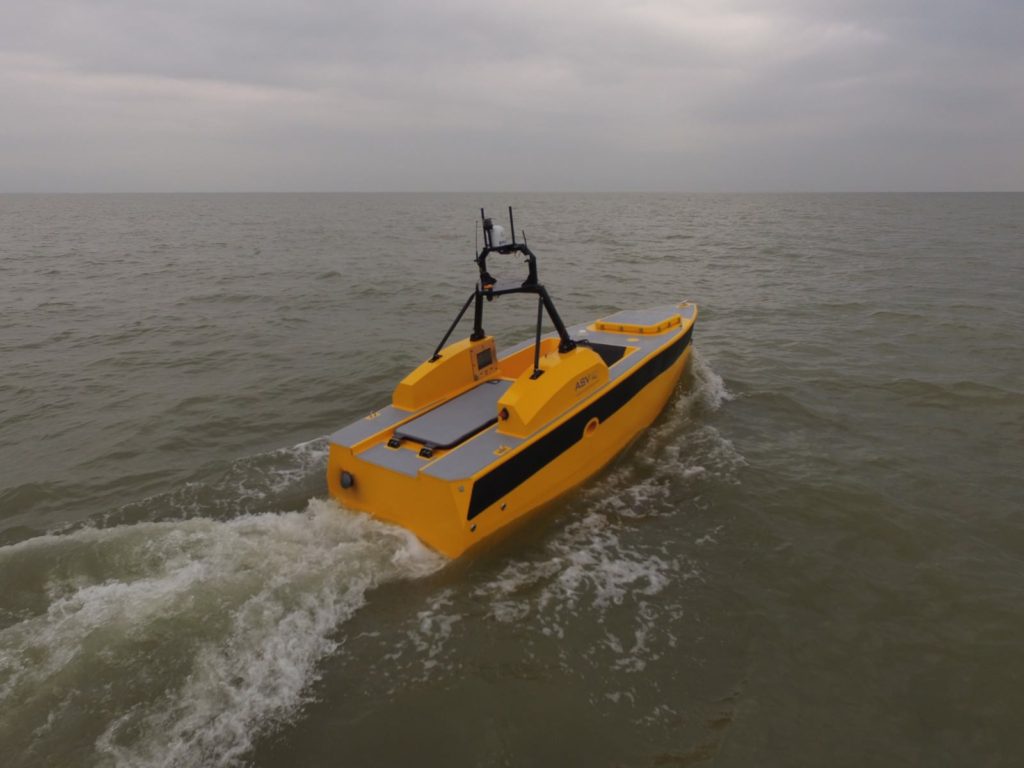 Extreme environments such as the Arctic are difficult areas to work indue to the size and remoteness of the area, limited ice-free season, and inclement weather. Autonomous vessels have been used for various applications in challenging environments and have demonstrated not only their ability to collect data but to do so at a lower cost and in a quicker time frame.

Due to the challenging nature of working in the Arctic, much of the region is unmapped or poorly mapped with data from surveys that are 70 years old.   The National Oceanic and Atmospheric Administration (NOAA) is working the chart the region using autonomous boats to survey Arctic waters.  In the Bering Strait, they are using AVS Global’s autonomous boat the C-Worker 5 outfitted with sensors to collect multibeam and towed sidescan data.  The autonomous boat  was used in conjunction with a manned research vessel to increase the area charted in a reduced period of time.   Using an unmanned vessel effectively doubled the area that could be mapped for minimal additional cost, and nearly halved the time required to complete the survey.

NOAA also used autonomous sailboats Saildrone to measure oceanographic and climate conditions in the Bering and Chukchi Seas.   The unmanned boats travelled 7,000 nm over a 3 month period, reaching the 75th parallel north and getting within a few miles of the ice edge. They tracked melting ice, measured the ocean’s levels of carbon dioxide, and monitored for the presence of fish, seals, and whales to better understand their behaviour and population. This data will help improve weather and climate forecasting and our understanding of ocean acidification in these critical ecosystem areas. 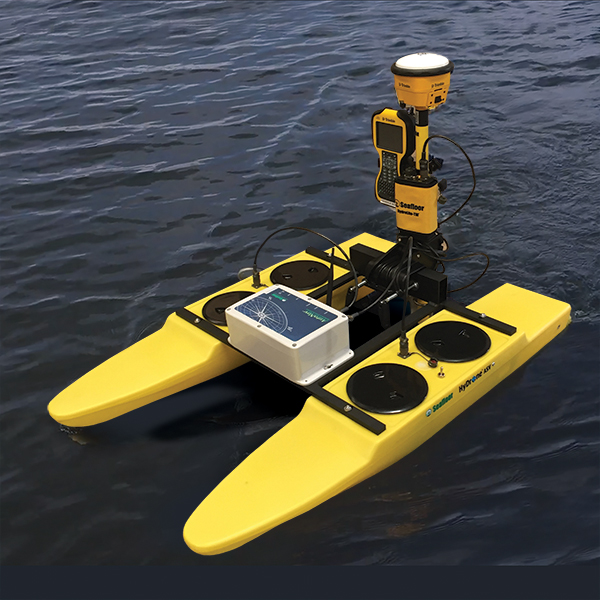 Hydrographic and bathymetric surveys measure and detail features of the coastline and seabed that is critical to maritime navigation, marine construction, dredging, offshore oil exploration/offshore oil drilling and related activities. Ships using sonar travel along the area of interest, gathering information about what is on the ocean’s floor.  Using crewed ships can be a very laborious, costly and time intensive process, as ships need to travel along the area of interest in a grid-like manner to adequately map the desired area.

There is a growing use of autonomous boats for this kind of work, in the ocean environment as well as in lakes, sewage treatment plants, rivers, mines and harbours.  In the Bering Sea, the NOAA used AVS Global’s autonomous boat the C-Worker 5 to map the seabed.  Autonomous battery powered boats such as Seafloor’s HyDrone ASV or EchoBoat-ASV are designed for a various of hydrographic survey applications with a range of sensors.

The UK-based company AutoNaut monitored the water quality by a sewage outfall off the south-west coast of England using their autonomous boat to analyze whether seawater close to the outflow was negatively affected. A European Union backed consortium with partners in France, Netherlands, Scotland, Slovenia and Cyprus created a robotic system of autonomous boats to detect and map algae blooms and then destroy them using ultrasound technology.  This is particularly important in coastal and inland waters where algae blooms result from eutrophication due to intensive agriculture and can contaminate drinking water supplies, ecosystems and shellfish or fish destined for human consumption. Speedy response to environmental contamination such as an oil spill is essential and autonomous boats have been used to monitor and detect oil spills, as well as assist in the clean-up. US-based company Saildrone, who produces an autonomous sailboat, was used in the Gulf of Mexico to locate and track natural oil seeps. 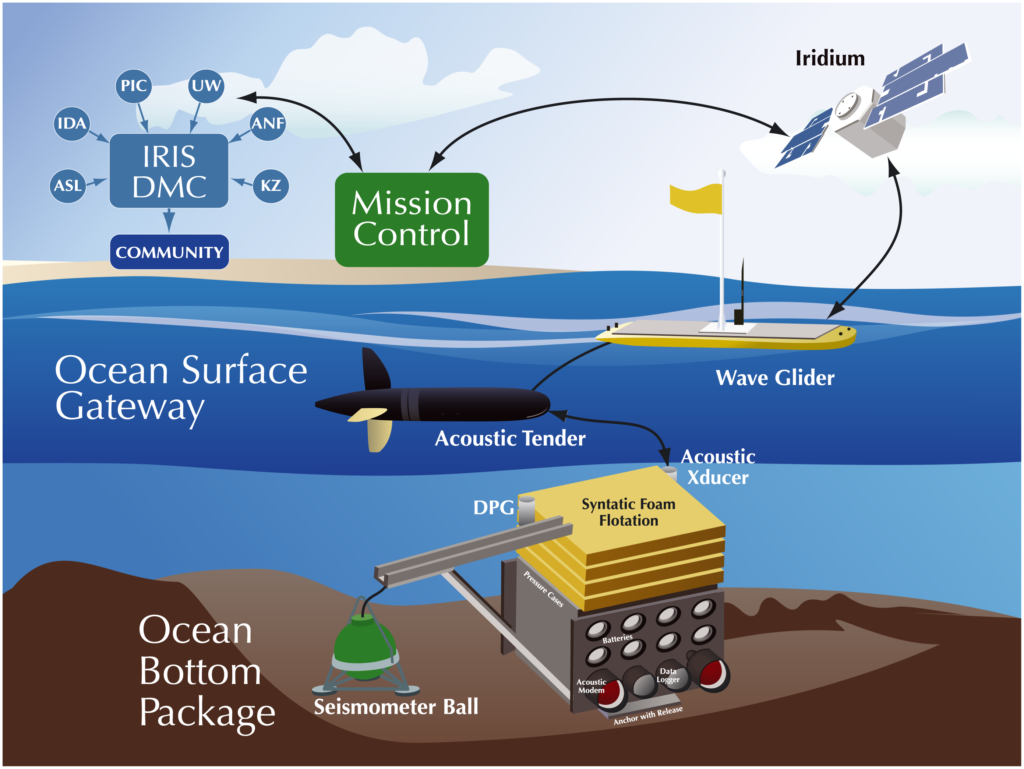 Early earthquake detection is key to saving lives.  Advance warning allows people to rush to safety, automatic brakes to halt trains and surgeons to pause critical operations. Ocean based sensors are more accurate and timely than land-based detection systems, as they are located closer to the fault line.  In addition to providing an earlier earthquake warning, they also offer more detail on the strength of the quake as well as the resulting tsunami.

Several countries, including the US, Canada and Japan, have invested in underwater earthquake monitors. The seabed-based seismometers are installed on the ocean floor near subduction zones, areas where one plate of the earth’s crust slides under another, and a cable connecting them relays the information to a research station or a moored buoy captures the sonic information and relays the information in real time. A cable or moored buoy is required to relay the information as radiowaves cannot travel through water.   This limits the location and number of seismometers that can be placed as the cable infrastructure and moored buoy can only be installed in relatively shallow waters.  Consequently areas with high seismic activity that have no nearby island or continental sites are impossible to monitor and the high cost limits the area that can be monitored.

Researchers are now exploring the feasibility of  using autonomous boats instead of moored buoys or cables to convey the information from the sea-bed seismometer. Scientists at Scripps Institution of Oceanography (Scripps) created an unmanned observatory, High Seas Telemetered Seismographic Observatory, that provides real-time seismic telemetry from the seafloor using the autonomous boat Wave Glider. Located in the Pacific Ocean west of San Diego, the seismographic station sits on the seabed under more than 4 km of water.  Other institutions such as the University of Victoria,  are also proposing acoustic communication from the sea-bed to surface vessel which will then transmit the information to the research station in real time. 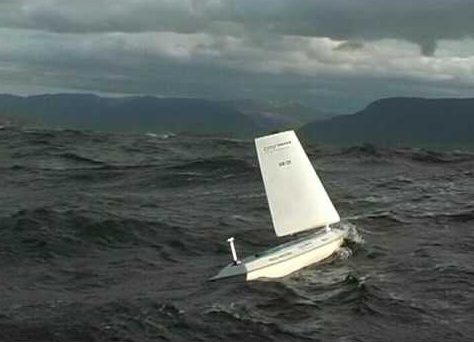 Autonomous boats equipped with sensors are capable of taking a multitude of measurements relevant to a broad array of research interests. The Norwegian-based autonomous sailboat SailBuoy was used in the Gulf of Mexico following Deepwater Horizon oil spill to study the consequences.  SailBuoy collected data on surface temperature, salinity and dissolved oxygen in regions affected by the spill including the De Soto Canyon and Mississippi River plume. SailBuoy was also used in the North Sea to measure wave heights, information that is currently obtained by wave buoys, as well as in the Faroe Islands and Svalbard, a remote archipelago near the North Pole.