We were in Ottawa this week speaking at the Association of Public Information Professionals (DPI) conference on risk management and achieving goals.  The speakers were an interesting bunch with a broad range of expertise and included Apple’s co-founder Steve Wozniak, Rick Mercer, Peter Mansbridge and David Suzuki.  The keynote prior to ours was by David Suzuki and we had the pleasure of meeting him again and hearing his eloquent impassioned speech.

Even though David Suzuki was speaking to nearly a thousand federal government employees he did not hold back on letting everyone know what a lousy job the government is doing protecting our environment. “I’m here to speak as an elder,” he said, explaining he was too old to care about wealth, power and fame; he was speaking straight from the heart.  He encouraged others in his demographic – he’s 77, but looks decades younger – to “get off your golf carts” and do the same.

There were many interesting points to his speech and the audience clearly loved it, giving him a standing ovation and peppering him with questions afterwards.  It was the kind of speech that can pull you out of complacency and shift your way of thinking.  Of course, he spoke about the enormous environmental threats our planet is facing and how we’re running out of time to correct the damage we’ve done.  But for me the most powerful moment came when he spoke about his father’s death and the last month they spent together.  His father told him “I die a happy man”, rich, not in a financial sense, but in the experiences he had with his families and others.  It was a powerful reminder of what is important in life.

Another interesting story he told was about a tiny landlocked Asian nation. In 1972 when the king of Bhutan was asked what his country’s GDP was, he replied that they measured their economy’s success by GNH – Gross National Happiness. Suzuki explained that to a Buddhist happiness isn’t the fleeting euphoria we feel when get a pay raise or complete a race but an “acceptance, contentedness, belonging – it’s about how we live with each other and on earth”.   Last year Bhutan led a high-level United Nation meeting on happiness; they’ve created a happiness index based on 33 factors and have made the world take this assessment seriously.  Not bad for a nation of less than a million people. This is just one of the things that make me want to visit this mountainous kingdom, and for those of you that share my interest, Suzuki warns that only a handful of pilots can land there and “you will shit your pants when you fly in”.

What Bhutan and elders are telling us is that our priorities are all wrong.  If we value the things that really mater, the things vital to life – air and water – we would treat the environment differently.  “What intelligent creature would use air and water as a toxic dump?” Suzuki asked. A healthy environment should be our constitutional right, and 177 of the world’s 193 UN members recognize that.  Countries that recognize our right to a clean environment have stronger environmental policies and more sustainable practices.  Canada is not one of those countries, and we have an abysmal environmental record.  Our environmental record is ranked 24th out of 25 countries in the Organization for Economic Cooperation and Development by Simon Fraser University. According to the World Health Organization, 30,000 Canadians die prematurely every year because of environmental hazards. The David Suzuki Foundation is currently petition to make a healthy environment our constitutional right and if you agree you can sign on here.

Constitutional recognition can lead to legal protection for the environment.  In Equator a family successfully sued a construction company for dumping rubble in the Vilcabamba River, disrupting fish habitat and causing widespread flooding.  They sued on behalf of the river, not for themselves or the other farmers whose crops had been destroyed, and the company was forced to rehabilitate the river.

The words economy and ecology both stem from the Greek word οἴκος, which means house.  Ecology is about understanding our home environment and economy is about managing it.  But today most people view economy as only dealing with money, when it should also value our health, community and environment.

Suzuki is great at giving us a vision to shift our thinking, but the most powerful messages are those we experience ourselves. To appreciate the environment we need to go outside, to feel dew on morning grass, watch a fiery sun dip beneath the horizon, hear bird melodies fill the sky and inhale the irresistible scent of a wild rose.  These things used to be a part of our daily lives, when people depended on crops for prosperity, but now that we live in concrete jungles and work in climate controlled spaces, we are no longer as connected to the natural rhythms of nature.

How much time do you spend outside?  Could you commit to spending 30 minutes a day outside for the next 30 days?  I thought this would be a piece of cake, as did Suzuki, but since signing onto the challenge he’s already missed 3 days.  You can sign onto the challenge at 30×30 Challenge and in 28 days I’ll tell you how I did.  We’d love to hear your thoughts on happiness, how you define economy and your experience spending 30 minutes a day outside.  Post a comment on our blog or facebook, or send us an email.

Now, I’ve got to get outside! 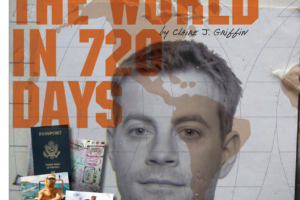 Join Colin at the Adventure Travel Film Festival in Peterborough[...] 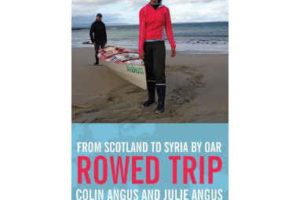