Last April we were rowing and towing our boats out of Scotland and through England; a year ago to the day, we slept across from Windsor Castle (the Queen’s adobe) in a tent nestled amidst scraggly trees and shrubs lining the Thames River. 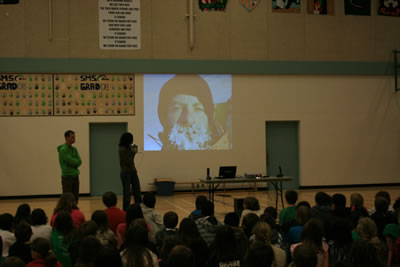 presenting to students in Summerland

In comparison this April has been less adventurous….well sort of. We didn’t have Scottish gales and 12 hour days of rowing to content with, but talking to thousands of students and starting a rowboat company comes with its own set of challenges, as does keeping up with Penticton’s King of Walking and a couple of Aussies hell-bent on getting more girls in the outdoors. And of course there are our ongoing home renovations, or ‘greenovations’ as Colin likes to call them.

Three weeks ago we took a trip to Penticton and Summerland, and spoke at all the middle schools and an elementary school. By the time we reached our fifth and final student-packed gymnasium, I was convinced that this part of BC has some of the best and brightest kids in Canada. Anyone who laments today’s youth should visit a Penticton middle school. Maybe it’s something in the water or more likely it is linked to the community’s dedication to innovative programs, especially those promoting healthy living. We were here as part of Healthy Heart’s hearts@school program, an initiative lauded for successfully motivating students to participate in new physical activities and creating enthusiasm for following healthy lifestyles.

On Earth Day, we were again reminded of the contagious enthusiasm of students. This time in our own community, Comox. We spoke to a highschool gymnasium packed with uber-attentive teenagers as part of their Earth Day celebrations, which also included picking up litter and sampling local farmer’s market goodies.

Besides meeting outstanding youth, we often get the opportunity to meet and befriend exceptional people who have made great contributions to their community through their commitment to their beliefs. Our host in Penticton, Bob Pope, is one of these people. He’s the city’s Recreation Programmer and spearheads countless life-changing initiatives centred on inspiring people and getting them active. He organizes talks and events, brings in rousing speakers and is the founder of a wildly successful pedometer-based walking program called Steps Out that has now been adopted by almost 50 BC communities. Thousands of people have taken billions of steps, shed considerable weight and improved their health, and it all started with Bob. Needless to say when we visited we brought our walking shoes and did our best to keep up with him and his wife Lynda.

We also had a chance to do some hosting of our own when two adventurous Aussies stopped by on their whirlwind tour to promote a web resource for girl explorers. Just because we smell better and aren’t covered in facial hair after a week in the woods doesn’t mean we don’t like to get rough and dirty. Marjorie Morgan, founder of GO! Girls Outdoors, is a perfect example of this. She’s tall with an athletic build, and has been an outdoor enthusiast all her life and an outdoor educator for much of it. After staying with us Marjorie went on to spend three more weeks at various US locations and then she’s heading back to Australia. Check out her website at www.girlsoutdoors.com.

And finally, there are the rowboats. We have partnered with a skilled boat builder and engineer in Vancouver Malcolm Chaddock who owns Taliesin Works Small Boats. Malcolm is using his considerable expertise to help create the plans and manuals for the boat. His warehouse is outfitted with all the technology and equipment needed to produce kit boats, including a CNC cutter, and beginning in October we will have kits and plans available. The first model we’re producing is the Expedition, which is the exact same boat we used for our Scotland to Syria trip. The Angus Rowboats website ( www.angusrowboats.com) is the place to find out more about the boats and how the development is proceeding.

If you’re a Toronto, Hamilton or Vancouver resident, you may want to come out to one of our May events. I’m speaking in Toronto on May 6 and May 7 as part of the eh List Author Series, a great event that brings top-notch Canadian writers to Toronto, including Governor General Award winner Nino Ricci, Miriam Toews, and Austin Clarke. I am thrilled to be a part of this event, and for you the good news is it’s free. I’ll also be in Hamilton on May5 at McMaster University for their Alumni Gallery where I’ll be recieving the Arch Award. And if you’re in Vancouver, how about spending Victoria Day (Monday May 18) afternoon with us? We’ll be at the Hollywood Theatre showing a couple of our films along with Nisga’a and Squamish Tribe dancing performers as a fundraiser for Tribal Journeys.

Find out more about our upcoming events at www.angusadventures.com/tour.html.

Thanks and have a great May.