On June 29th at 4:55  AM Steve Price and I completed our quest to voyage the Yukon River from Whitehorse to Dawson City.  Our total elapsed time to cover this 715 km stretch was just over two days at 50 hours and 50 minutes.  We set the record for the fastest unsupported journey from Whitehorse to Dawson City, and the fastest non-stop voyage.  We missed breaking the overall human-powered record (held by a six-person racing canoe with a time of 49:32). Speed quests are measured by tallying total elapsed time from start to end.  Any rest or repair breaks are not subtracted from total time. 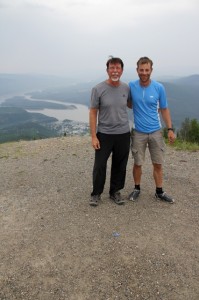 Colin and Steve celebrating their arrival in Dawson City. Yukon River pictured behind.

Unfortunately, more than one and a half hours were lost on Lake Laberge due to heavy headwinds.  At one point so much water was coming into the boat from waves that we could only just keep up with the bailing.  Had conditions been calm on Lake Laberge, we would have comfortably achieved our goal of completing the voyage in under 49:22.  We departed from Whitehorse at 2:00 AM so we would reach the infamous 48 km-long lake in the early morning hours, historically the calmest time.  Unfortunately, we received the strongest winds of the day.  Later that afternoon, when contestants of the Yukon River Quest (our efforts were not in any way associated with this race which bans rowboats) came through the winds were calm.  Weather data indicates that winds are generally at their peak in the afternoon, so just bad luck for us.

We rowed continuously for 50 hours and 50 minutes without stepping ashore.  The rowing was completed in two-hour shifts, one person at the oars while the other rested.   We used a sixteen foot Oxford Wherry, a vessel I designed and built.  Its performance and weight is similar to a Kevlar racing canoe, however, it incorporates elements of traditional rowing boats for aesthetics.  For propulsion, we utilized a sliding seat rowing system and carbon fiber oars.  While the boat offers similar performance to a racing canoe, the propulsion system (sliding seat rowing) is more powerful than paddling allowing it to go significantly faster (assuming cargo, passenger weight, etc are the same).

The person on the off shift would relax on a Thermarest eating, sleeping and drinking.  This two person system is unique in small boats (it is used in larger offshore rowing boats), but is one of the most effective ways to maintain speed over long distances.  On flat water without current we can sustain a continuous speed of between 7-8 km/hr – for one day or one month.  For shorter distances this system would be a disadvantage as it would be more efficient for both crew to be rowing together – faster but unsustainable.  If we were competing in a race such as the Yukon River Quest where periodic rest breaks are incorporated, our strategy would be to row in tandem giving us a speed of about 30% faster relative to the water.

The approximate two days to voyage from Whitehorse to Dawson city is just long enough to allow our two-person alternating rowing system to be advantageous and give us an edge over continuous dual paddling/rowing.

The main disadvantage of being in a rowboat is our rear vantage.  An important element for success is to be able to read the river currents effectively and use them to your advantage. Continuous forward visibility is a huge advantage in interpreting the subtle clues offered by the river. 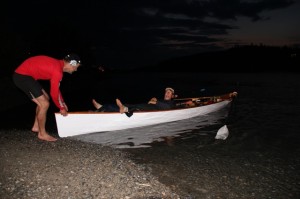 Colin and Steve launching in Whitehorse. Only 715 km to go!

The infamous Five Finger Rapids posed no problem for our boat.  We passed through these turbulent waters at five AM, and while I wasn’t concerned about capsizing I was worried about getting soaked and further chilled than I already was.  Nine years ago I passed through these same rapids in a canoe and we were thoroughly drenched by the standing waves.  Fortunately, oars offer infinitely more control and power than a paddle, and we were able to delicately thread the boat through the rapids avoiding the larger waves and staying dry.  Our sleeping bag had been previously soaked by rain showers and wave trains (and dried in the sun), so it was nice to have it dry downstream of Five Finger rapids.

Steve and I arrived in Dawson City at 4:55 AM.  We were feeling tired but in good physical shape, and felt we would have no problem maintaining our routine for another month.  The boat performed flawlessly – tracking well through the turbulent waters and providing ample stability.  No repairs or adjustments were required for the duration of our quest. While we didn’t break the overall human-powered record, we were thrilled to have done as well as we did.

A big thanks to my wife Julie and Steve’s wife Ann for all their support and help.  Also a big thank you for Boreale Biking in Whitehorse for providing accommodation and witnessing our departure. 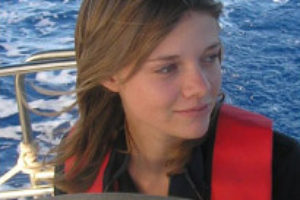