Much of the open water crossings are behind Colin.  He is now travelling northern BC’s majestic fjords.  These narrow inlets bordered by steep mountains provide a labyrinth of more protected waterways.  It’s a remote wilderness and he hasn’t seen a single other boat in the fjords.

This morning Colin passed through the check point at Bella Bella.  There he stopped for a coffee break with fellow racers Sistership and watched to his horror as his boat came untied and sailed across the harbour.  He sprinted to the boat and managed to slow it, but his ama still sustained damage.  Fortunately, he was able to repair it with the epoxy he brought along and was on his way in 15 minutes.  He faced stiff 20 knot headwinds and 4-foot waves leaving Bella Bella, but calmer conditions and slight tail winds followed later in the day.

This is only his second time off the boat since the race started.  Colin sleeps on the boat every night and only comes to shore to refill his water containers and empty his trash. Now he’s anchored off Susan Island in the provincial park of Jackson Narrows and settling in for a solid night’s sleep. 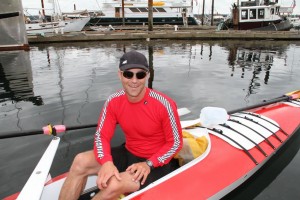 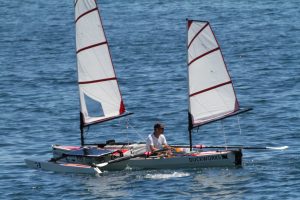